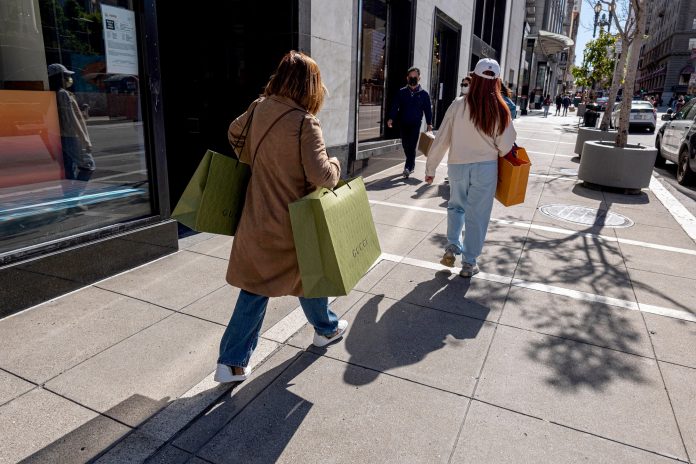 The latest inflation reading shows that prices rose by 5.4 percent on an annualized basis in September as supply chain bottlenecks, worker shortages and high demand kept prices rising, according to data released Wednesday by the Bureau of Labor Statistics.

The inflation rate rose a seasonally adjusted 0.4 percent in September from August, according to the latest consumer price index. That is well below the 0.9 percent seen in June but not enough to point to slowing inflation.

Increases in food and shelter accounted for more than half of the index’s increase, with food rising 0.9 percent. Gasoline rose 3.9 percent, and new vehicles rose by 1.3 percent.

Apparel fell by 1.1 percent, and transportation services were down 0.5 percent.

The “transitory effects” of inflation that Federal Reserve Chairman Jerome Powell has spoken of may last a little longer yet.

Consumers have faced elevated sticker tags on everything from lumber to menu prices to used cars as sellers raised prices to fend off heightened demand and pass on increased costs as pandemic economic disruptions continue to whipsaw global economies. Covid-19 concerns and labor shortages have led to backups at every pinch point in the supply chain, from production to unloading to trucking to shelf-stocking.

And consumers shifting spending from entertainment, leisure and travel to goods has ramped up demand just as the system is under greater strain.

But shoppers should not be worried there aren’t enough presents coming to fill store shelves for Christmas and the holidays, Treasury Secretary Janet Yellen said in an interview with CBS that aired Tuesday night.

“There may be isolated shortages of goods and services in the coming months,” Yellen said. “But there is an ample supply of goods. I think there’s no reason for consumers to panic about the absence of goods that they’re going to want to acquire at Christmas.”

Whether there is the manpower to get those items unloaded and trucked to stores is the question.

President Joe Biden is set to announce Wednesday new plans to help ease pressure at the ports, which have been backed up for months with lines of container ships waiting to unload.

Walmart, FedEx and UPS will operate on a “24/7” basis, and longshoremen will man extra shifts to speed the processing of cargo container ships at two West Coast ports, the White House said.

Consumers are starting to notice the price increases and say it’s hitting their pocketbooks.

“A recent Bankrate survey found that 89 percent of adults have noticed rising prices, and troublingly, 66 percent of those noticing higher costs say they have negatively impacted their personal financial situation,” Greg McBride, chief financial analyst for Bankrate.com, said. “The rise in shelter costs will exacerbate the negative financial impact so many households are feeling from higher prices.”

“Food and shelter increases together contributed more than half of the seasonally adjusted increase in the CPI,” he said. “With home prices soaring and rents surging, this may just be the tip of the iceberg.”